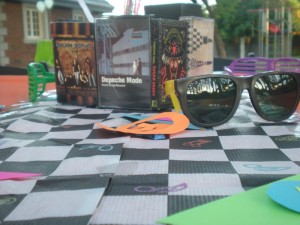 Which reindeer’s name is also the name of a kitchen cleanser? Comet

What does Alvin want for Christmas?   Hulla Hoop

What is the first thing Frosty says when he comes to life? Happy Birthday

What town did the Who’s live in? Who-ville

What was Grandma drinking when she got run over by a reindeer?
EGGNOG

What U.S. city lights the Christmas tree on the Ellipse?
WASHINGTON, D.C.

In “The Night Before Christmas,” what type of headgear does Mamma wear?
A KERCHIEF

From a religious viewpoint, what is the only holiday considered bigger than Christmas?
EASTER

Name the two reindeer whose name begins with a “C”.
COMET AND CUPID

What do the first seven gifts from my true love have in common?
THEY ARE ALL BIRDS

What is the name of the most famous Christmas ballet?
NUTCRACKER

What popular Christmas toy was named after Theodore Roosevelt?
THE TEDDY BEAR

According to the Gospels, what did the Wise Men bring?
GOLD, FRANKINCENSE AND MYRRH

What does Alvin want for Christmas?
A HULA-HOOP

Who wrote the music for “The Nutcracker”?
TCHAIKOVSKY

What is the German title of “O Christmas Tree”?
O TANNENBAUM

What did the lamb say to the shepherd boy?
DO YOU HEAR WHAT I HEAR?

What saint brought Christmas to Ireland in the fifth century?
ST. PATRICK

What army do you associate with the kettle?
SALVATION ARMY

In what song do we “take a cup o’kindness”?
AULD LANG SYNE

What seasonal plant is Encinitas, California noted for?
POINSETTIA

What is the name of Scrooge’s clerk?
BOB CRATCHIT

What Irish song was a hit for Bing Crosby?
CHRISTMAS IN KILLARNEY

Traditionally, Christmas trees and other greenery should be removed from the home after what day?
EPIPHANY

Why is Blitzen always wet?

1. Who invented the art of giving presents?

2. How many eggs are in a quart of eggnog?

3.How did red and green become traditional colors of Christmas?

4. What is the average temperature at the North pole?

5. Where was I when “I saw Mommy kissing Santa Claus?”

6.Boris Karloff was the star of what TV Christmas classic?

7. Who sang” Santa got run over by a reindeer?”

6. How the Grinch stole Christmas